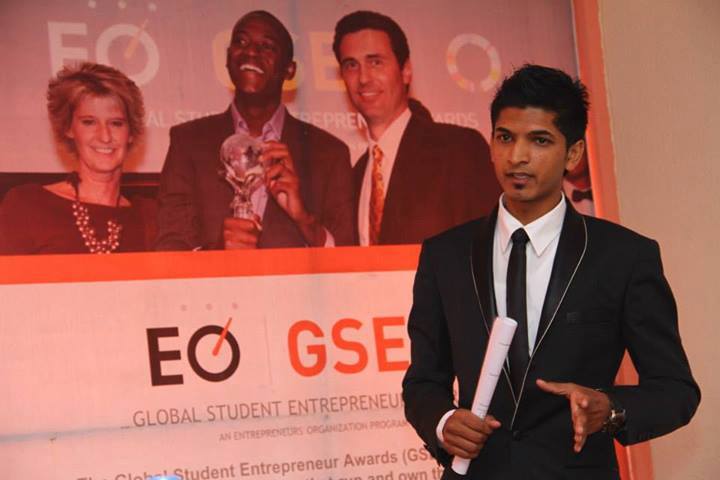 Ritesh Marwadi is a two-time winner of GSEA Nepal, winning each event with two different companies. He shared a few words about this background, his experiences at GSEA and advice for other participants.

Tell us a bit about your background

In a short span of three years we have international brands like Pernod Ricard, Carlsberg, United Spirits, Yamaha, Samsung, Camel Cigarettes, and others as major clients. I started my first event with a mere Rs. 8,000 and today we are one of the best in the industry.

I opened another company in 2014 called Mr. Beans, the first corporate cafeteria service provider in Nepal. We opened five cafes within seven months and were very successful.

I also recently opened a company in London, UK called LIVE EN with a friend of mine which will host world class live events in the UK in 2016.

How did you decide to participate in GSEA Nepal?

I did an event in 2013 for EO Nepal called Everest Summit Nepal that hosted 150 participants from 28 countries. This is where I met EO Nepal members and got to know about GSEA Nepal.

What is the company / product that you won GSEA Nepal with?

I won GSEA Nepal 2013 with my first company We Fear Silence. We won due to the extraordinary service and growth in the field. It also gave me an opportunity to go to India where I learned about scalability and expansion which I applied to my company.

I won GSEA Nepal 2014 with my second company Mr. Beans which took me to the finals in Washington DC where I got exposed to the world’s top 40 entrepreneurs. I was able to get mentorship from some great people in the food business which helped me improve my own business.

How did the idea for the company / product come about?

The idea of We Fear Silence came to me when I came back after completing my +2 in India. I felt that the events / parties in Kathmandu had no standards and could be improved.

Furthermore the college I studied in Nepal had very unhygienic food which led me to start Mr. Beans.

Winning GSEA Nepal twice and representing the country on a global platform was an amazing experience. It also gave me a mentor / partner with whom I have been working on my future projects even today.

The GSEA showed me where we stand and what people of my age or even younger age have achieved in life. It gave me the hunger to do more!

What kind of experiences did you have at the GSEA Global Finals?

GSEA 2013 was my first step to entrepreneurship where I learned we all are capable of becoming something great in life but that it requires dedication and passion. I could not win the semifinals in India so I promised myself that I’d be making it to the global final in Washington DC next year.

During GSEA 2014 I met people who were making millions of dollars at just 21. Their vision was something that I think young people lack in Nepal.

Along with other participants I got to meet accomplished entrepreneurs from all around the world who mentored us and shared with us their stories of struggles and success.

Today I not only have have 40 friends from 40 countries but I also have 40 like-minded people.

What words of advice do you have for other GSEA Nepal participants?

Whatever you present in the GSEA should not only be your business but it should be your passion as well. Make sure you have a vision for the future. Definitely do not fake data or information in your presentation.